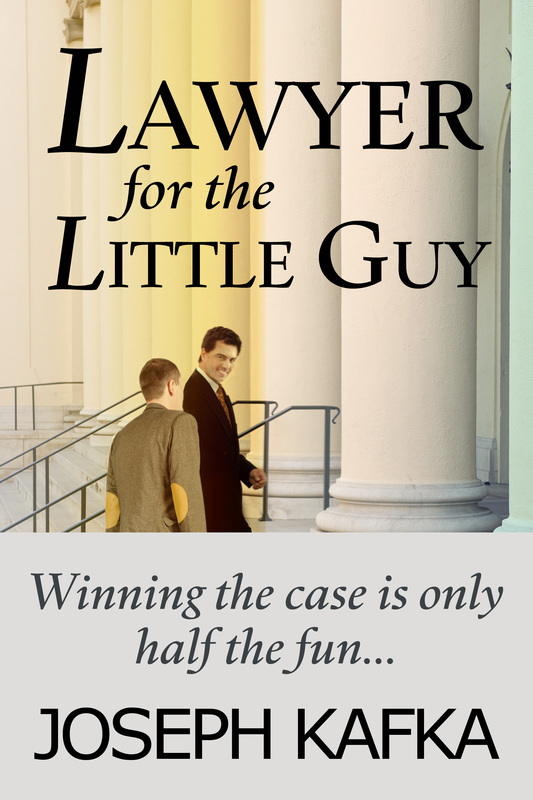 My novel, LAWYER FOR THE LITTLE GUY, is now available as an ebook at Amazon.com. There have been over 5,000 sales to readers in the United States, Canada, and Australia. The ebook has earned 75 reviews with a 4.3 star rating out of 5. It is a suspenseful, humorous, and inspiring story. Here is a description and samples from two chapters.

Trial is a month away and closing fast on young lawyer Jake Beck. The scumbag who ripped off his client for one million dollars will get what’s coming to him if Jake has anything to do about it. It’s a tough case when your client is shy and sweet and your adversary is hard and mean. And when he’s a lawyer. And the brother of your client. Jake’s first trial has him facing impossible odds and many obstacles. But the underdog wins some of the time, right? Jake’s wisecracking boss, the judge for his case, and even his client have their doubts. Still, it’s not all legal work and no play when Jake falls for a brainy blonde and she introduces him to her “adopted” Greek family. Maddy Carter is an eco-minded Santa Cruz, California girl right down to her electric car and yoga classes. Jake embraces their love and support during the darkest times in his pursuit of justice for the little guy.

In Chapter 4, Booze Cruise, Jake experiences a “teaching moment” with his boss, Brownie.

Jake looked Brownie straight in the eyes. “That guy deserves to be sued and to have a big verdict against him. He’s got to pay Ray back and never do this to anyone else.”

Brownie took a drink of Scotch before responding. “I thought you would say exactly that. I attribute it to the fact that you’re young and dumb.” He smiled and patted Jake’s knee. “Sorry, I mean, you’re a recent law school graduate and inexperienced in the ways of practical justice. Jake, we have a simple-as-shit client suing a big-shot crooked-ass lawyer over what the two of them talked about in private. No witnesses, no records. It’s just one guy’s word against the other guy’s word. It’s a very hard case.”

Jake was taken aback by Brownie’s cynicism. “Well, I think Ray’s a good guy in a tough situation, who needs dedicated lawyers willing to get the job done.”

Brownie put his glass down. “Let’s start over, because I wanted this assignment to be a teaching moment. Lesson number one is that if you want to be a good trial lawyer, you must weigh the benefits and the risks of going to trial for your client. When the benefits outweigh the risks, you try your case.” Jake was listening closely. “Two, Ray may be a good guy, but we need to be objective about him. It’s no good to be emotionally entangled with a client. A doctor does not operate on her own husband, right? Otherwise, the poor guy might never survive surgery,” he snorted. “Or he might come out missing an important part or two.”

Jake took a deep breath. “I’ll consider what you said. And I’ll never marry a doctor,” he laughed. The idea of benefits and risks for the client had never been mentioned in law school. He could see that it made sense.

Brownie picked up his glass and emptied it. “Sometimes a client is well served by a settlement check and not a doomed courtroom fight. And my ability to make payroll and pay all the other damn bills is much improved.” He pointed to the beer in Jake’s hand as a signal to drink up.

Brownie’s finances should not figure into the risk/benefit equation for going to trial for the client, Jake thought. That bothered him, but now was not the time to bring it up.

“In summation, keep your eyes wide open and think with this.” Brownie pressed a finger against his head. “And not this.” He moved the finger to his heart. “And certainly never this.” The finger moved to his crotch. “That’s why I’ve been divorced twice,” he laughed.

Jake took a long drink from his beer while considering what Brownie had said. How big a risk was trying this case against a scumbag lawyer?

In Chapter 17, Bunking with Bubba, Jake is found in contempt of court and ends up in jail.

Once the lawyer left the courtroom, Judge Zobel turned back to Jake Beck.

“Fail equals jail in my courtroom. What is your excuse for being late?” The judge needed it on the record, though anything less than an earthquake destroying the courthouse was going nowhere.

“I had an unforeseen problem involving my alarm clock. It did not go off. I had every intention of being on time and mean no disrespect by appearing late,” Jake said with sincerity. “I am prepared to pay a fine. This will never happen again.”

The judge nodded. “Mr. Beck, I find you in contempt of court. One-half day in confinement is your sentence. Join Mr. Stanley in the rear of the courtroom and wait to be taken into custody by the deputy sheriff.”

“But I made an innocent mistake, and I was only eleven minutes late. Your Honor, I think that a reasonable fine rather than jail is called for. A fine is equally or more effective.”

“Mr. Beck. I find that jail works considerably better than a lawyer writing a check on the firm’s account. Although parting with money is painful for most lawyers.” The judge smiled.

Jake did not find a jail sentence humorous. He had never been jailed and did not want to be now for something trivial. “I am not prepared to go to jail this morning. I have a lot of work waiting for me in the office.”

“Fail equals jail. It’s short and easy to remember. Lawyers never forget once they experience it.” Judge Zobel stood and left the bench for her chambers.

Jake walked to the back of the courtroom and sat on the same bench as Mr. Stanley.

“This is bogus, man.” the lawyer said.

“Gentlemen, I only have one set of cuffs.” He patted the handcuffs hanging from his belt. “Who wants them?” He saw a mixture of terror and humiliation in their eyes. “Can’t decide? Well, you two look harmless enough. Besides, I have a gun and you don’t. Follow me.”

Outside the courtroom, the deputy sheriff led Jake and Stanley to the patrol car and told them to get into the back seat. He got in and radioed the station house. “I’m bringing in two lawyers from Judge Zobel’s courtroom. Let’s put them in with Bubba. I think he’s lonely for company.”

Jake shook his head in agreement as he gave Stanley a sideways look. He had a good three inches and thirty pounds on Stanley. If it came down to it, Stanley was Bubba’s date.

The tires squealed as the patrol car left the parking lot. The deputy drove down the hill and onto the city streets. He merged onto Highway 1, southbound. Several miles later, he exited, drove down three blocks and pulled into a lot next to a gray concrete government building.